Lovech – the covered bridge, the old town and the fortress 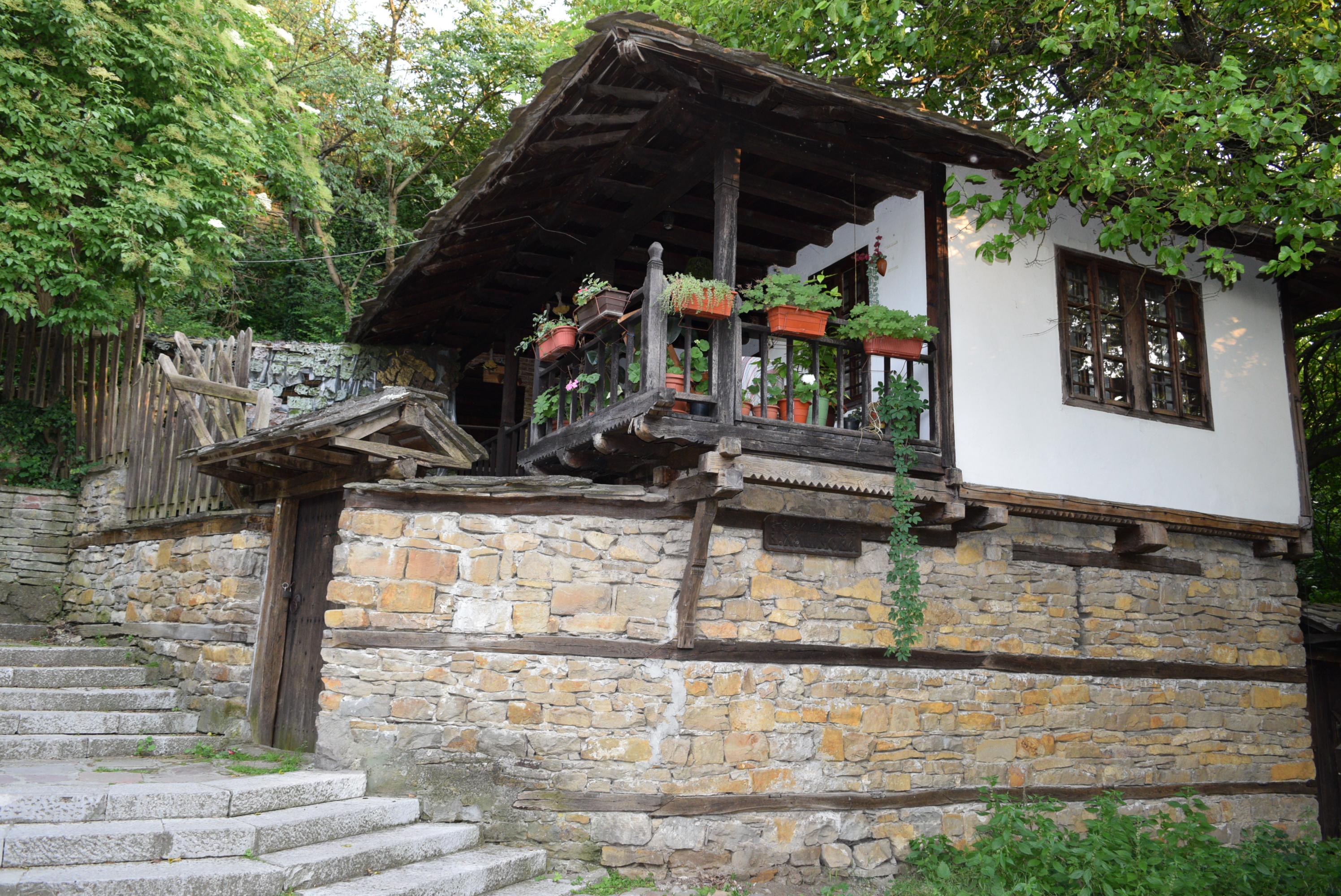 I haven’t visited Lovech for a loong time. Actually the only thing I remember about it is the famous covered bridge of the bulgarian builder Kolyu Fitcheto, which has always hosted traditional crafts shops.

Well, I recently revisited Lovech and I must say I was pleasantly surprised. This is one of those Bulgarian cities which has its own, very unique atmosphere; an atmosphere that stems from the glorious past of the city and that still emanates the spirit of old times. An atmosphere of peace and serenity that is in perfect harmony with the calm waters of river Osam (it goes through the city) and the green majesty of nearby Stara Planina mountain.

Lovech is just a couple of hours drive from the capital Sofia along a major road. If you come over, plan a few days at least since there’s so much more to see in and around Lovech.

What to see in Lovech?

Your visit to the city should of course start from the covered bridge of Kolyu Fitcheto, it is the symbol of the city and connecting point between the modern and the past, taking you straight to the old city of Lovech. 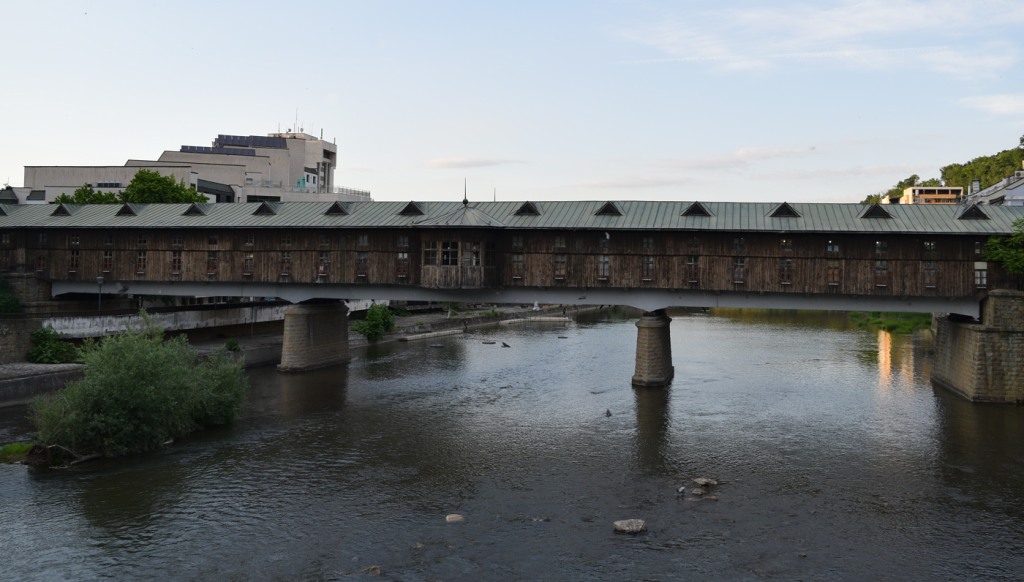 Built in 1874-1876 by the famous Bulgarian builder Kolyu Fitcheto, the bridge had to replace the previous stone and wood-based bridges, which has been used as extension of the city commercial street and hosted a number of crafts shops. Those bridges could not survive the high waters of the river Osam (passing through the city). After several destroyed bridges, Kolyu Fitcheto was assigned the task to build a really robust bridge. The unique covered bridge he built did not use any metal in it – only stone and wood and housed 65 craft shops.

Who was Kolyu Fitcheto? He was a very famous builder known for his quality of work. He built more than 25 bridges, churches and houses throughout Bulgaria and his work can still be admired nowadays. Other bridges by him can be seen in Byala, Ruse, Dryanovo and Sevlievo.

Unfortunately, the bridge he built got burnt in 1925. It was recovered in 1931 but, rather than stone and wood based, it was an iron and glass bridge. It wasn’t until 1982 that the bridge was partially re-constructed, to return more or less to its original appearance. Nowadays the bridge mostly hosts traditional craft shops. 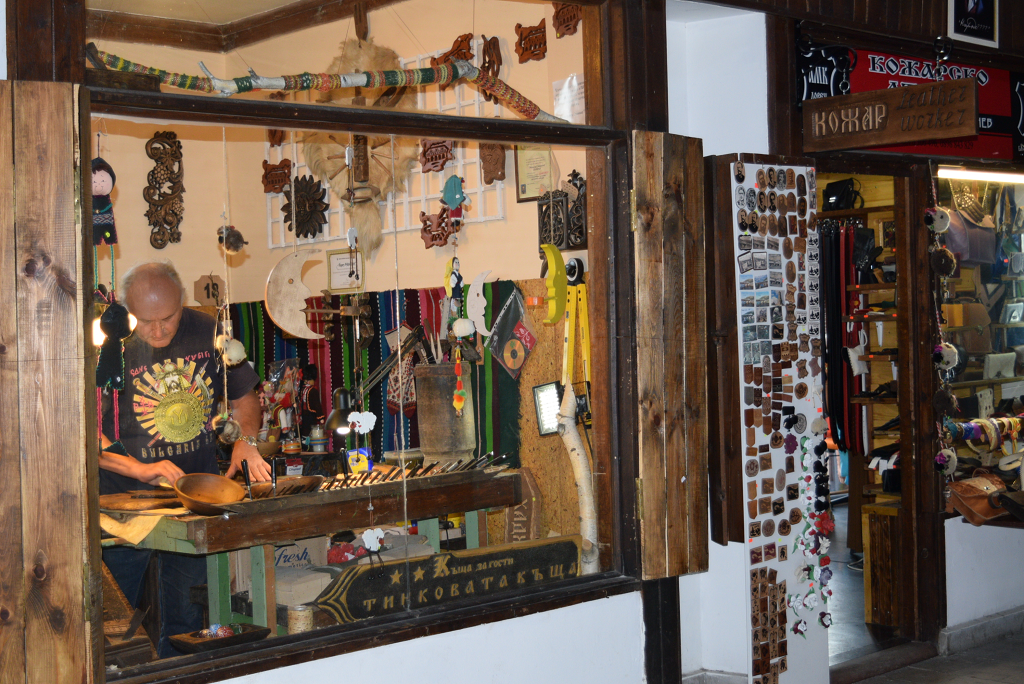 Crafts workshop in the covered bridge

If you are travelling around Bulgaria, you will find out that other old cities (like the one in Blagoevgrad, Pernik, Razgrad, etc) are also called Varosha. The word varosha actually means ‘an old town with a fortress’ and has Hungarian origin.

In Lovech Varosha you can find very well preserved Bulgarian houses from 1850-1870 which used to belong to renowned city craftsmen. Some of these houses are turned into museums nowadays. 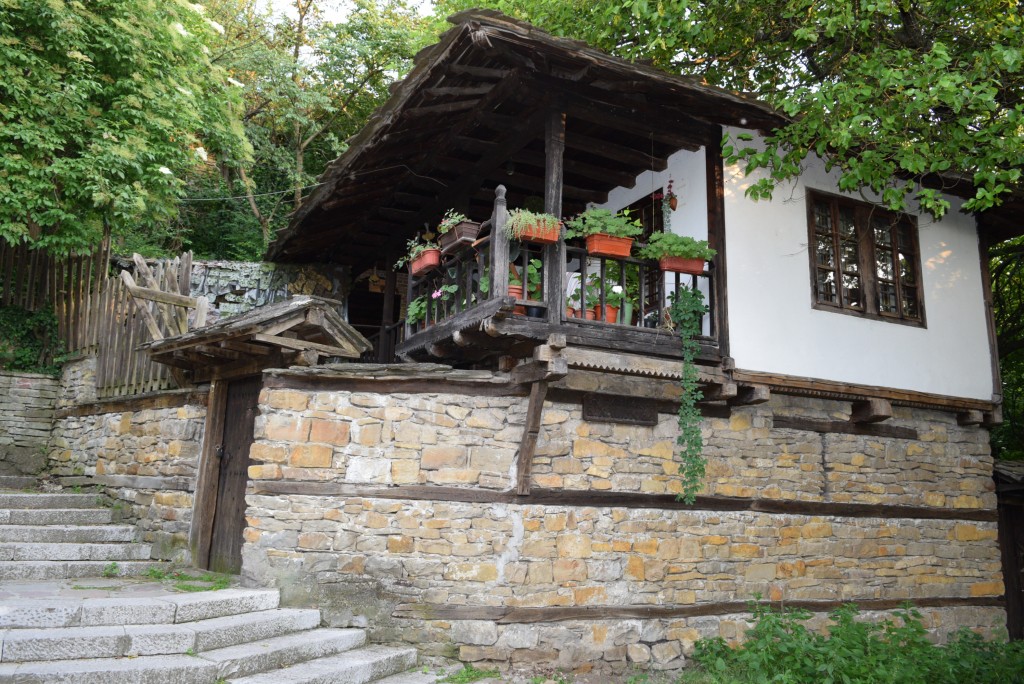 A house in the Old City of Lovech

While you walk the streets of the old town, make sure to visit the church Uspenie Bogorodichno. It was built in 1834 and hosted the local revolutionary committee in the years before the liberation of Bulgaria from the Turkish occupation.

Another interesting sight here is the old bath Deli Hamam. It houses the first and only virtual museum of water in Europe that displays how the bath and its heating system functioned once (closed when we visited, but heard it’s impressive)

Climbing the steep streets of the Old City, you will reach the top of Hissarya hill and the monument of Vassil Levski – the most important figure in Bulgarian history. The monument opens impressive views to Lovech city, on one end, and to the gorge of Osam river, on the other end. 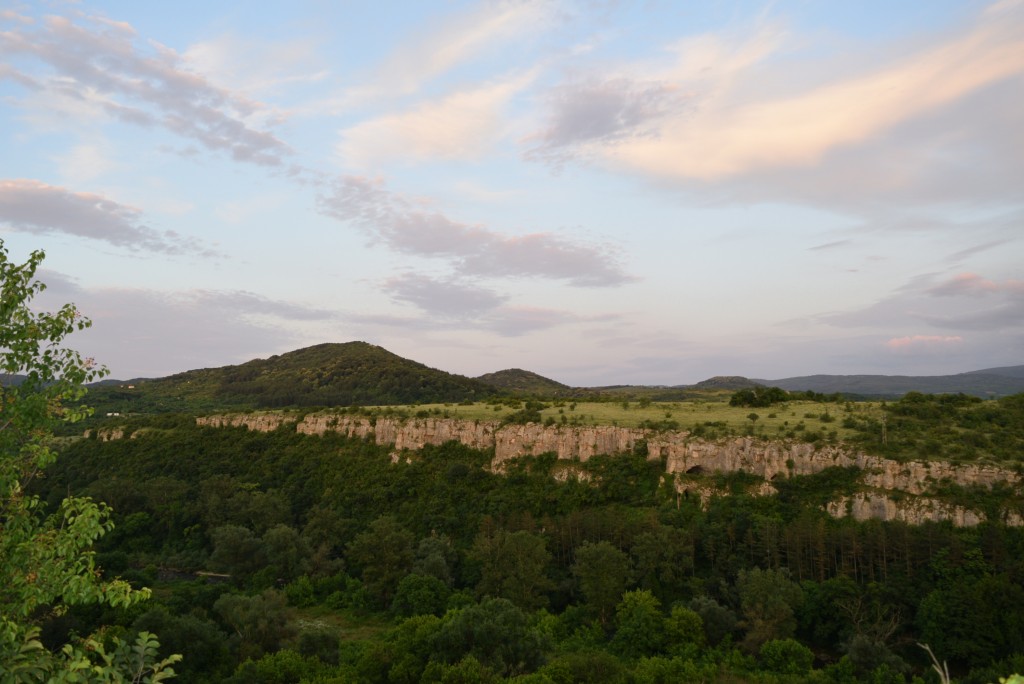 The gorge of river Osam, with several caves seen in the rocks

If you want to find out what are those caves seen in the gorge – head to the entrance of Lovech fortress nearby to find a map of the area and all historical and natural sights. You will find out that there are several caves very close by and, if you want to hike a bit, you can plan a visit to those.

Lovech fortress itself is really nice to walk, not steep and very attractive for kids too. It has a long historical past dating back to the stone age, when the hill was first settled. Later on a Thracian settlement was built here, then a Roman one. The most important event related to this fortress is from the 12 century, when the Byzantine empire signed a peace contract with the Bulgarian rulers. This event marked the beginning of the Second Bulgarian Kingdom. 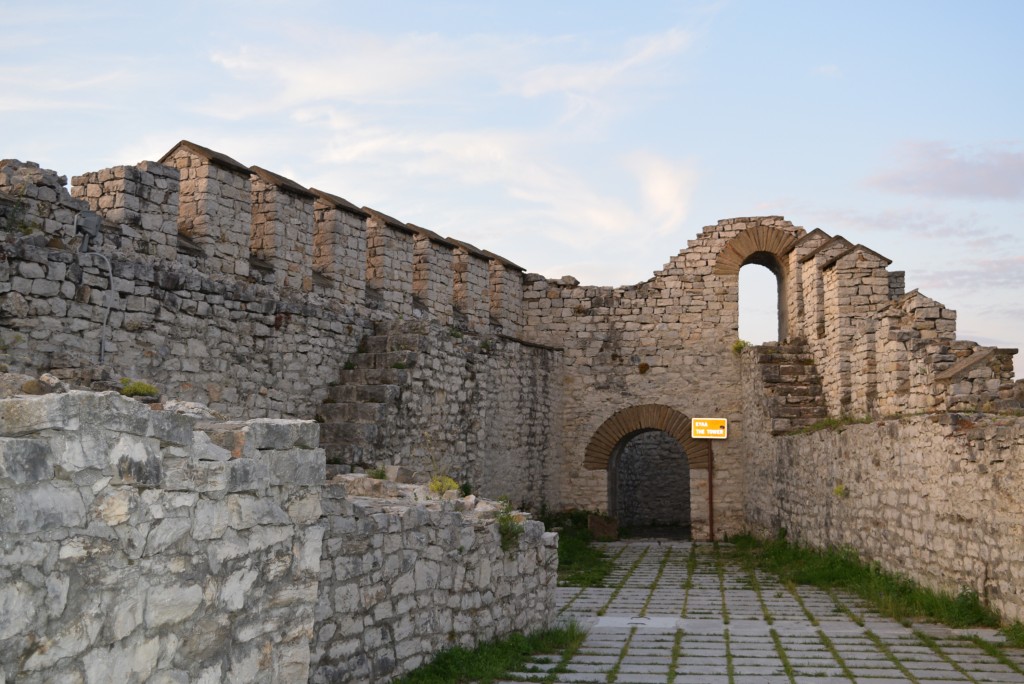 The fortress houses the remains from 7 churches dating back to different times in the past, a castle and residential buildings of presumably important people. Because of the positive energy of this place, the fortress nowadays hosts lots of weddings and city celebrations.

I was pleasantly surprised that the fortress could be seen after the official working time too. The guard welcomed us in and even introduced us to the fortress to some extent. There are lots of info signs too.

Where else to go after you’ve seen Lovech 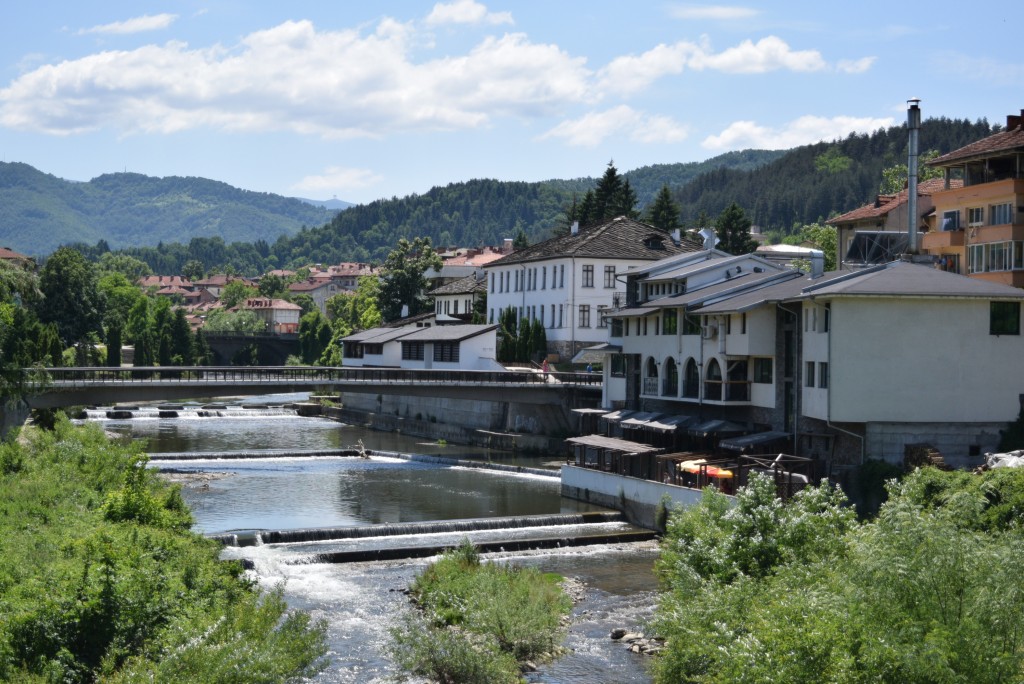 The nearby city of Troyan

Enjoy Lovech! More on what to visit around Lovech is coming in a next article.

One thought on “Lovech – the covered bridge, the old town and the fortress” 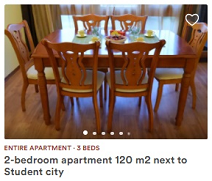