Standard by GreetBulgaria February 9, 2020 No Comments 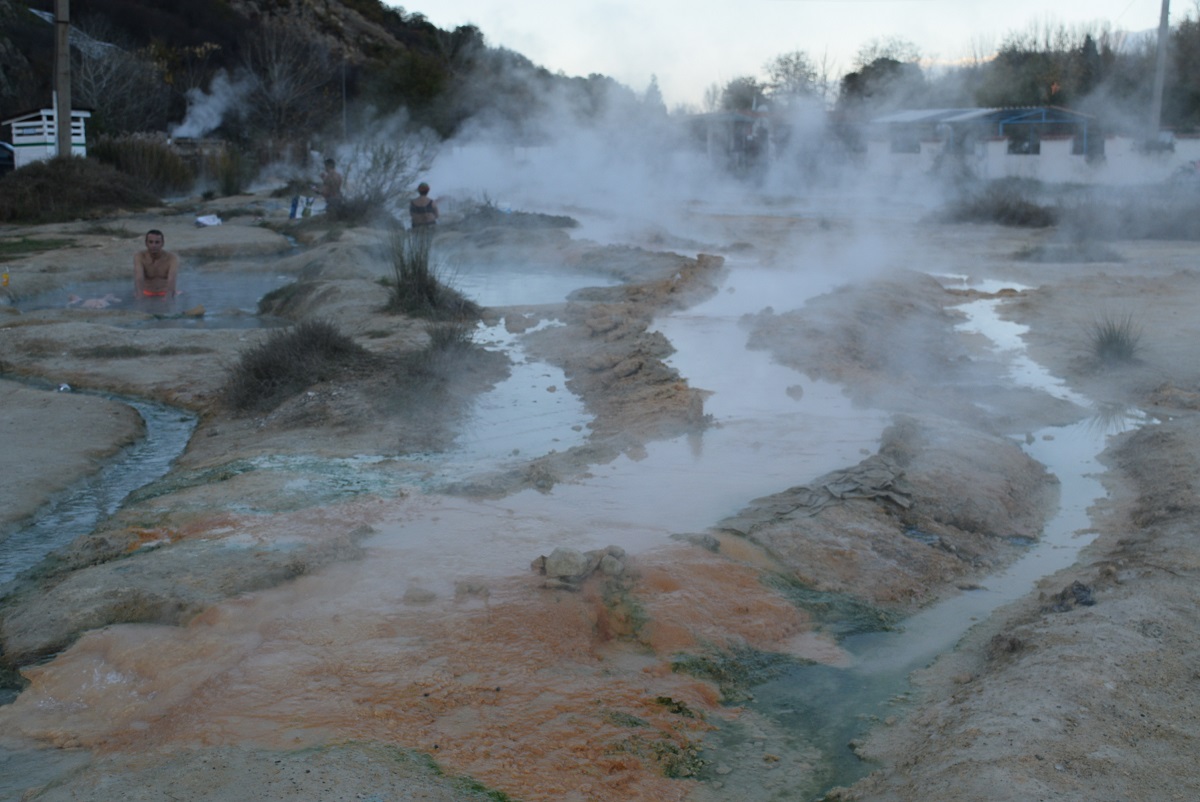 If staying in Bulgaria during the cold winter season or just want to get somewhere sunny, peaceful and beautiful at any time of the year – Sandanski is your place.

Located just an hour and a half from the capital, taking a good highway road, Sandanski is one of the southern-most cities in Bulgaria and the city with the most sunny hours throughout the year. It is a few kilometers from the border with Greece, has a very beautiful park, hot mineral springs and lots of sightseeing to do inside the city and around.

Here is how to reach, what you can see and do in and around Sandanski.

How to reach Sandanski

Reaching Sandanski is easiest via car, and there are many affordable car rentals in Bulgaria. However, if you prefer public transport, you can also get the bus. If located in Sofia, there is a bus departing from the central bus station and reaching Sandanski within approx 3 hours. If located in other cities, you need to reach either Sofia or Blagoevgrad and then catch a bus to Sandanski.
It is also possible to reach the city using train, but you will have to change the trains one or more times. So, car or bus are your best options.

What to see and do in and around Sandanski

Sandanski has around 80 mineral springs where the water comes out with temperature between 40 and 80 degrees Celsius. The water has low minerality, has no smell or color which makes it suitable to be used for healing treatments and in spa areas.

Enjoy a stroll in the city park

Sandanski has an amazing city park (one of the biggest in Bulgaria) starting right at the end of the main street. You can pass the numerous bridges over the river running through it, sun-bathe on one of the cute benches around its lake and watch the ducks nesting inside small bird houses in the lake, grab a cup of coffee or get onto the small Ferris wheel allowing spectacular views over the park. At the beginning of the park there is a miniature model of Pirin mountain and close by is a caged house of pheasants.
The park has more than 160 plant species, some of them brought from exotic Asian destinations.

If you are willing to drive some 15 kilometers from Sandanski, you can enjoy free, open-air hot mineral water pools. The thermal water in those is quite hot – 70-75 degrees Celsius – and that is why the locals have created small pools alongside the main stream where the water can cool off and you may dip in. You have a dressing cabin and plenty of parking space. The rest is healing water, an energy-charged area and beautiful views.

Why energy-charged area? The pools are right next to the house of the famous Bulgarian prophet Baba Vanga (you can visit it, has a very nice park and a church), who used to say that the area is charged with enormous energy. In addition, in very close vicinity there is a hill which is claimed to be an once-active volcano which however, according to the prophet will become active again at some point.

Heraclea Sintica is located in direction Petrich, some 20 km from Sandanski. It is one of the fairly new archaeological sights the excavations of which have only recently been accelerated. Heraclea Sintica is an ancient city considered to have been of the most important cities on the Balkan peninsula until the end of the 4th century AD, with a population of around 40-50,000 people. It gained its name from the Thracian tribe of Sintians who lives on these lands and later on, after conquering the city, Philip II added Heraclea to the name. The location of the city was chosen because of the mineral water coming out nearby and evidence has been found that the city had numerous fountains where the water was coming out from the mouths of sculptures of mythical creatures.

The city has been destroyed by several devastating earthquakes but a final, big one put an end to it. Nowadays the sight keeps being uncovered and is expected to become one of the major sights in southern Bulgaria. There is always a person from the museum available on site, who can tell you curious stories about the excavations.

There are several roads taking you to Heraclea Sintica, but the one that is in best condition is from Rupite village. Head in direction Museum House Vanga, pass it, go by the hot springs and continue for about 1 km to arrive straight at Heraclea Sintica.

If you are passionate about good wine, the region of Sandanski and nearby Melnik have a wine producing tradition since ages. The mild climate and the soil benefit the growth of quality vines and there are numerous wineries in the region.
One very easily accessible winery, located in the outskirts of Sandanski and offering wine tours and wine tastings is Sintica winery. It has a winery and hotel (which by the way is very comfortable, with a nice spa area) in one place and offers a number of different wine tours. You can also check out Zornitsa family estate which offers wine tours and relax with amazing views, they also have an year round external hot water pool.

Rozhen monastery is one of most picturesque and well-preserved monasteries in Bulgaria.

It is considered to have been built in the 13th century or even earlier. Despite being destroyed by fire several times, it has been recovered, the last time in the 16th century. The church (which is magnificent) and some other premises date back to that period. The monastery keeps an icon of Virgin Mary which is considered miraculous and curing illnesses.

The monastery is just 1 km from the beautiful village of Rozhen so, leave your car at the parking and enjoy walking to it. On the way upwards to the right you will see the stunning Melnik pyramids – a natural wonder which spans quite a large area.

The pyramids have once been the bottom of a lake and water getting down from the mountains around it used to bring and pole up sediments at the lake bottom. At some point however tectonic movements caused changes in the surrounding relief and the lake bottom took the shape of the current pyramids. There are similar pyramids on the way to the Rila Monastery – the Stob pyramids (see my blog post on Stob pyramids).

If you can, visit the pyramids at sunrise or sunset – the red/yellowish color they gain during those times of the day is stunning. Or, if you are spending more time in the area – walk the eco path from Rozhen monastery to the town of Melnik. It takes about 1.5-2 hours of walking but you can enjoy the pyramids and their awkward shapes in full.

On the way to Rozhen monastery you will pass by a huge church building (not functional) and a tomb. Both are connected to a Bulgarian national hero – Yane Sandanski (the city of Sandanski was named after him) – who helped the Bulgarians in the region to preserve their national spirit throughout the period when south-western Bulgaria had been left out of the borders of Bulgaria and in the Ottoman empire after the Treaty of Berlin 1878. The big church you will see was erected on Sandanski’s own expense so the local Bulgarian population would go to pray there rather than in the church of Rozhen monastery which was then served by Greek monks who were trying to convert them.

Visit the wine town of Melnik

Melnik is the smallest town in Bulgaria – some 25 people are said to have a permanent residency there. But it is also a town famous for its wineries, delicious food and beautiful houses.

Take a walk around this charming city, try the delicious local cuisine and get a bottle of wine from one of the numerous stores in the town. You can also visit Kordopulova house – an enormous and well-preserved 3-story house built in 1754. The house is now a museum with big underground wine cellars which you can visit on a wine tasting. Very much worth the climb up the central Melnik street!

Where to stay in Sandanski

Sandanski has a great choice of accommodations and probably one of the least expensive but very comfortable private accommodations (i.e rooms in guesthouses, with own sanitary facilities) are here. If it’s warm and you are coming with kids, definitely opt for a private house with a big yard where the kids can play. Many private accommodations would also offer traditional Bulgarian breakfast (have personally been to Keremedchieva guest house and can recommend). And you can relax in a hot mineral pool available at some of the hotels offering paid access for non-guests (see above).

If you’d rather stay at a place with a hot mineral pool – Medite spa is a nice choice. Sintica winery and hotel has a small but very nice spa area, it has a very nice interior feel and good kids facilities, and the bonus bottle of wine was a nice surprise.

In all, Sandanski offers one of the most diverse options for sightseeing and relaxation in Bulgaria, also price-wise. Make sure to visit it!